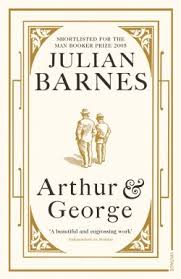 ‘Arthur & George’ by Julian Barnes is a fictionalised account of the Great Wyrley Outrages case at the turn of the twentieth century in which  George Edalji, a half-Indian solicitor from Staffordshire, is accused of mutilating farm animals and is later sentenced to seven years in prison.  Fans of Sherlock Holmes will already know that Sir Arthur Conan Doyle played a significant role in this case by setting out to prove Edalji’s innocence.  Although this miscarriage of justice has largely been forgotten over a century later, Barnes has brought the story vividly back to life and I think this book would be enjoyable for both those who have prior knowledge of the case and also for those who don’t.

I am a fan of Barnes’s work and his effortless style of prose.  Compared to his other more experimental work such as ‘A History of the World in 10 1/2 Chapters’, ‘Arthur & George’ seems much more conventional in style but equally fascinating and meticulously researched.  Even though ‘Arthur & George’ is based on a true story, Barnes’s vivid interpretations of the characters make the book feel truly original.  I would say George is the more interesting of the two but there are also valuable insights into Arthur’s character particularly through his relationship with Jean Leckie.  The story itself does unwind quite slowly but it is very well structured and an undercurrent of Barnes’s trademark subtle humour is always present throughout the novel.

I still haven’t read ‘The Sense of an Ending’ which won the Man Booker Prize last year – ‘Arthur & George’ only made the longlist in 2005.  Reading a novel as intelligently written as ‘Arthur & George’ serves as a reminder that I should try and get hold of a copy as soon as possible.