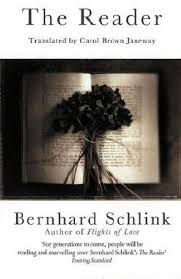 ‘The Reader’ by Bernhard Schlink tells the story of fifteen year old Michael Berg who has an intense affair with a much older woman, Hanna Schmitz.  Years later, Michael discovers that Hanna, who was an SS guard at Auschwitz, is being prosecuted for war crimes after World War II.  Michael, now a law student, watches her trial and tries to come to terms with the collective guilt surrounding Germany’s past.

‘The Reader’ is widely regarded to be a very important book in Germany, as it deals with the emotions of Schlink’s generation born immediately after the war.  The issue of historical memory in the aftermath of one of the darkest moments in twentieth century history and the perspective of post-war Germans has not been explored as much as the Holocaust itself in literature but is still equally complex.   ‘The Reader’ is a very short, intense book and the writing is sparse, sombre and appropriate to the subject matter.  Michael’s obsession with Hanna both before and after their affair is very convincingly written and each of the three parts of the story are well balanced and controlled. In spite of the brevity of the story, it contains many thought-provoking layers raising multiple questions and emotions in the reader so it is not what I would call an easy read.

With so many fictional and autobiographical accounts available, Holocaust literature is practically a genre of its own.  ‘The Reader’ stands out for dealing with the symbolic unspoken shame of the generation which followed Nazi Germany rather than the graphic horrors of the Holocaust itself.

6 responses to “The Reader by Bernhard Schlink”