The Yellow Birds by Kevin Powers 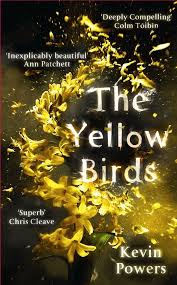 Winner of the 2012 Guardian First Book Award, ‘The Yellow Birds’ by Kevin Powers is about two young soldiers from Virginia fighting in the Iraq war in 2004 on their first tour of duty in Al Tafar.  The story is told from the point of view of twenty-one year old Private John Bartle as he describes what happened to him and fellow soldier, Daniel Murphy, who we quickly learn will not make it home alive.   The chapters alternate between the war in Iraq and the events after Bartle’s homecoming as details slowly emerge of exactly what happened to them.

‘The Yellow Birds’ is not so much about “the big picture” of the Iraq war.  Instead, it focuses on the emotions and experiences of one soldier.  Powers himself is a veteran of the Iraq war who served for two years as a machine gunner in 2004-2005.  I don’t know how much of ‘The Yellow Birds’ draws directly on his own personal experiences but it is certainly an honest and brutal account of the chaos and absurdity of war.  Despite being set in a very specific place and time, the book is therefore, in many ways, timeless.

The language is at times poetic, sparse, and raw and yet always remains understated and unsentimental.  The description of going into combat as being like the heart-stopping moment before a car collision is just one example of the brilliant imagery in this book.  While Powers doesn’t shy away from the nightmarish horrors of the war, the book never feels voyeuristic or sensationalist.  Both the physical and mental effects of the war are covered unflinchingly.  For me, the passages recounting Bartle’s struggle to readjust to life back at home were the most intense.

‘The Yellow Birds’ is an exceptionally powerful book which manages to capture a wide spectrum of emotions in spite of its brevity.  It is even more remarkable that this is Powers’ first novel.  Essential reading for everyone.

9 responses to “The Yellow Birds by Kevin Powers”