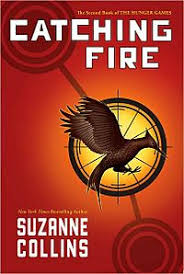 Today I whizzed through ‘Catching Fire’, the second book in the Hunger Games trilogy by Suzanne Collins.  Uprisings against the Capitol have begun in several Districts and Katniss and Peeta compete in the Quarter Quell with previous victors for the 75th anniversary of the Hunger Games.  I found this installment of the series to be reasonably compelling but not completely satisfying.

In some ways, ‘Catching Fire’ is an improvement on the first installment of the Hunger Games trilogy.  Right from the beginning, it seemed like a more confidently written book.  The themes surrounding the impact of the Capitol on the characters were developed more in this book and I was glad that Collins avoided repeating herself by changing the format of the Games and adding new elements to the story including the appearance of several new characters.  Katniss is still the stand-out teenage heroine and for me it is her character that is the most impressive feature of the books.

I was however disappointed that Peeta and Gale still seem like fairly faceless characters and that Peeta didn’t really develop much until towards the end of the book.  This is probably not helped by the fact that Katniss is just as confused by how she feels about them as she was before in the first book.   Also, the Games themselves take a looooong time to get going so I felt that the momentum was lost a bit in this book.  I guess the second part of a trilogy is almost always just the ‘transitional’ book in the series building up to the finale and ‘Catching Fire’ is no different.  I hope the pace picks up again in ‘Mockingjay’.