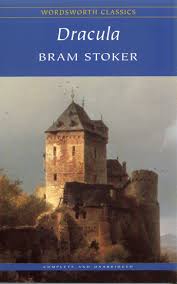 I had planned to read ‘Dracula’ by Bram Stoker when I was studying ‘Frankenstein’ by Mary Shelley at school but never got round to it.  This chilling story begins with a young lawyer called Jonathan Harker visiting Count Dracula in Transylvania to conclude a real estate investment only to find he is effectively a prisoner at his castle.  He survives his ordeal but the nightmare does not end there – several strange events are occurring back in England involving Jonathan’s fiancée Mina and her friend Lucy.  It is up to Doctor Van Helsing to try and stop Dracula before it is too late…

‘Dracula’ is one of the most modern classics in terms of its style which I wasn’t expecting – if you are apprehensive about approaching nineteenth century classic literature then I think this is probably one of the best places to start.  Although it was first published in 1897, the novel seems like it could have been written much more recently as the language is not particularly archaic.  The story is told mostly through journal entries, newspaper clippings and letters between characters allowing the reader to see the events from multiple perspectives.  It is a very effective technique and the haunting atmosphere and suspense is well sustained throughout the novel.

At times, it almost felt like I had read ‘Dracula’ before given that Stoker’s vampire creation is so iconic and so ingrained in my consciousness already because there have been so many reinterpretations of the book.  As a result, Stoker’s Dracula still influences some if not all of the gothic horror genre today. Forget the Twilight saga though – ‘Dracula’ is the real deal when it comes to vampire fiction.

12 responses to “Dracula by Bram Stoker”