The Crossroads by Niccolo Ammaniti 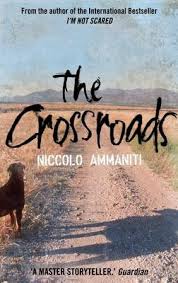 ‘The Crossroads’ by Niccolò Ammaniti is a dark-humoured thriller which won the Premio Strega – the Italian equivalent of the Man Booker Prize – in 2007.    Unsatisfied with their lives, Rino Zena, and his low-life friends Danilo Aprea and Quattro Formaggi (yes, it’s a nickname) plan to carry out a bank raid and come up with the supposedly perfect crime.  However, events soon take them in unexpected directions.

This story covers everything from the faintly ridiculous to the exceptionally violent – I should warn you that the contents of this book are not for the faint-hearted.  Although the father-son relationship between Christiano and Rino was interesting, for me, it was the supporting characters who were the most memorable – how could you forget a lunatic with the nickname Quattro Formaggi?  ‘The Crossroads’ is very different from anything else I have read recently and I enjoyed the gritty depiction of ‘real’ Italy as it is very rare to encounter a completely unromanticised view of the country in modern literature.  The story itself is told in very short fragments (244 of them over 400 pages).  On one hand, the brevity of the scenes gives the story an almost cinematic quality and helped keep up the pace.  On the other hand, I also thought that the narrative could appear inconsistent and undeveloped at times because there was so much flitting about between different perspectives.

Even though it has been a long time since I read ‘I’m Not Scared’, I would say that I don’t think I was as engrossed by ‘The Crossroads’ as I was by ‘I’m Not Scared’ which was more subtly written.  However, it is still a good read especially if you are looking for something a bit different, as it is quite hard to come across modern Italian fiction in English translation.

4 responses to “The Crossroads by Niccolo Ammaniti”