The Night Circus by Erin Morgenstern 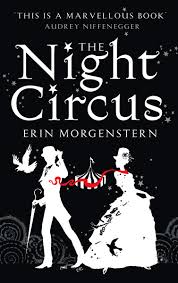 Although lots of people may say that you should never judge a book by its cover, in the case of ‘The Night Circus’ by Erin Morgenstern, I think it’s acceptable to do so.  I love this book cover not just because it is very pretty but because I think it matches the story so well too.   Lots of adjectives like ‘dazzling’, ‘enchanting’, ‘spellbinding’, ‘imaginative’, ‘captivating’ and ‘magical’ have already been used in the critics reviews on the cover to describe this book.  I would like to add that it is also highly original especially for a fantasy story.  Set in the late nineteenth century, ‘The Night Circus’ tells the story of Le Cirque des Rêves which “appears without warning” in various locations. Two young illusionists, Celia and Marco, are trained to compete against each other in a mysterious battle by their respective protégés, Hector Bowen and Mr A. H–, but the rivals soon become lovers.  As you might imagine, this complicates things somewhat.

I think the last time I read a book about a circus was probably when I was about seven years old so I was intrigued by how a setting normally associated with children’s literature would be depicted in a ‘grown-up’ fantasy book.  This isn’t Harry Potter but it isn’t really like anything else either as the concept of the story is quite unique.  The writing is very assured for a debut novel and Morgenstern’s use of vignettes written in the second person interspersed through the main narrative really helps involve the reader as they are personally guided around the circus.  ‘The Night Circus’ is definitely a slow-burner of a story – it doesn’t contain a great deal of plot twists and is very descriptive.  The beauty is all in the atmosphere, the setting and the attention to intricate detail.  Sometimes I wondered if I might actually prefer ‘The Night Circus’ as a film because the scenes seemed more cinematic in style than literary but maybe this just demonstrates how Morgenstern’s writing can really bring the circus to life.

‘The Night Circus’ is pure, dreamy escapism.  It’s not really suitable for those who want an action-packed plot but it sure is pretty to look at though…

11 responses to “The Night Circus by Erin Morgenstern”