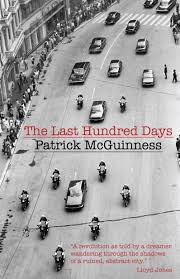 Longlisted for the Man Booker Prize last year, ‘The Last Hundred Days’ by Patrick McGuinness tells the story of a young British expat living in Romania at the time of the fall of Ceaucescu in 1989. Offered a job at a university, the unnamed narrator soon becomes embroiled in a web of corruption and betrayal. Loosely based on McGuinness’ own experiences, it is a shocking, sometimes brutal account of life under the shadow of a dictator and his rapid downfall. It is a story told with bleak authenticity.

I recently read Snowdrops by A. D. Miller which shares a number of similarities with ‘The Last Hundred Days’. Both are tautly-written thrillers about the collapse/aftermath of communism in eastern Europe told from the point of view of cynical British expats and both were nominated for the Booker Prize last year. I enjoyed ‘Snowdrops’ but I slightly preferred ‘The Last Hundred Days’ which I think was a bit meatier in terms of overall substance. Interestingly, it was ‘Snowdrops’ which went on to be shortlisted for the prize and I hope that ‘The Last Hundred Days’ wasn’t overlooked from the final shortlist purely because of its coincidental similarities with ‘Snowdrops’.

While I was aware of the personality cult of Ceausescu before I read this, the cold reality of day-to-day life in Romania was still shocking even in the form of a fictional account especially considering that 1989 was not all that long ago. The fact that McGuinness is also a poet clearly shows in his writing which offers some real insight into the underworld of corruption and everyday life in Bucharest during a tumultuous period of history. The characters are vividly drawn if not always likeable. In particular, the subtle development of the narrator’s journey from initial detachment to total involvement in events is fascinating. An impressive debut all round.

4 responses to “The Last Hundred Days by Patrick McGuinness”