The Paris Wife by Paula McClain 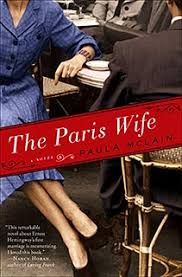 I have got really, really behind with writing up my reviews and I am doing my best to catch up this week before Christmas!  I actually read ‘The Paris Wife’ by Paula McClain about three weeks ago.  It is a fictional account of Ernest Hemingway’s first marriage to Hadley Richardson told from her point of view after a whirlwind romance and their life together in the 1920s before he found worldwide fame as a writer.

When I first started reading this, I wondered why a fictional account of Ernest Hemingway’s time in Paris was really necessary.  So much has already been written about his life, his diaries and letters are routinely pored over by scholars and virtually every aspect of his work has been analysed to death.  But although there is nothing very new or radical or even particularly original in Paula McClain’s account of what may or may not have really happened between Ernest and Hadley, I found her take on events to be quite moving.  Above all, ‘The Paris Wife’ is a story about a relationship breakdown and the fame of the characters seems to become largely irrelevant in some ways.  The way McClain builds up the tension in the marriage and the growing sense of resentment and bitterness on both sides is very well done in spite of the reader knowing that it is doomed from the beginning.  The author is, however, better at building atmosphere than she is at controlling pace, as the middle was quite slow.

Given the title of the book, I was expecting the majority if not all of it to be set in Paris.  In fact, ‘The Paris Wife’ actually covers most of Hadley’s early life and the many other places where she lived and travelled to with Ernest during their short marriage.  McClain has clearly done a lot of research and provides a factually accurate (as far as I know) and convincing account of events.  I’m not sure if experts and die-hard fans of Hemingway would like it but for anyone interested in the 1920s, Paris or Hemingway’s life, ‘The Paris Wife’ is worth a read.

11 responses to “The Paris Wife by Paula McClain”