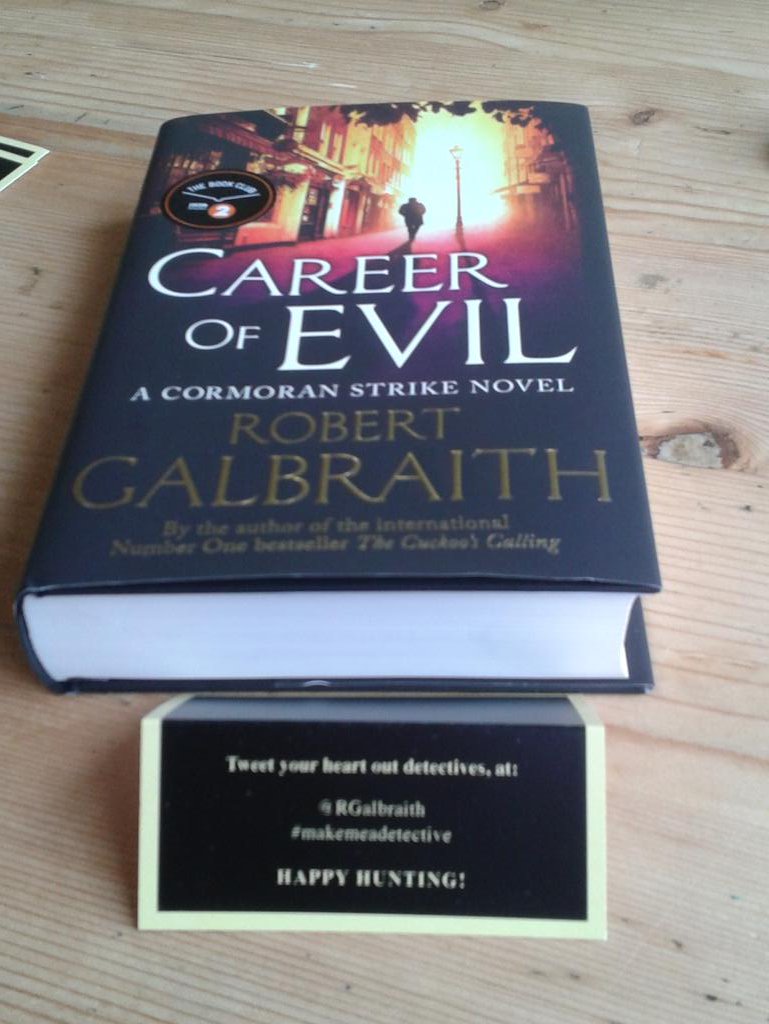 To celebrate the launch, the publishers of ‘Career of Evil’ teamed up with Time Run to organise a special crime thriller version of a live gaming experience where teams need to solve clues and puzzles to “escape” the room as quickly as possible. Based in Hackney, it’s been described by the Metro as “immersive theatre meets Crystal Maze but better”. This definitely wasn’t going to be a typical book launch…

I was lucky enough to be invited by the publishers to attend the event on Wednesday, the day after ‘Career of Evil’ was published in the UK. Many of the other people there had won a competition after spotting this sign on Denmark Street, London outside Cormoran Strike’s fictional offices. It was also widely circulated on social media with the hashtag #MakeMeADetective:

Upon arrival somewhere in the middle of an industrial estate near London Fields station, I was taken to a cafe across the street where I was put in a team with four other competition winners. We had all been allocated an hour long slot at 2pm and were originally meant to be split into two teams of three people to complete the challenge head-to-head in separate rooms. However, as one person didn’t turn up, we were allowed to complete the challenge together as a team of five known as Detective 7.

My fellow super sleuths and I had an introductory meeting with Stephen Cooper of Roper Chard publishers. Fans of the series will know that the fictional publishing house features in the second book where Strike investigates the gruesome murder of the author Owen Quine. Although it wasn’t essential to have read the books in order to participate, it was much more fun understanding the context of the challenge.

After the briefing where we were told we needed to find a hidden manuscript, we were taken down a long corridor and sent into the escape room which was set up as an office containing a desk, chair, cabinet, chest, a giant jigsaw puzzle and a few other items. The challenge involved solving clues and cracking codes in order to unlock several cabinets and find all of the pieces of the jigsaw puzzle of a map of locations in London which appear in the books. Once the puzzle was completed, the UV lighting revealed we had one final set of clues to solve and this unlocked the final safe which contained Quine’s manuscript.

I don’t know the exact amount of time it took us to find the manuscript although I think it was around thirty minutes in total, maybe a little less? After “escaping” the room, we were rewarded with a copy of the book, a box of Strike matches, Cormoran Strike’s business card and a pint of Doom Bar – those who have read the books will know that this is Cormoran Strike’s alcoholic beverage of choice.

At the end of the day after all of the teams had completed the challenge, we were told that our team had escaped the room in the fastest time with Team Detective 3 coming second. Better still, we have all won special copies of ‘Career of Evil’ signed and dedicated by Robert Galbraith himself!

This was a truly unique event to celebrate a book launch. I don’t know exactly how similar this particular event is to other escape games set up by Time Run but they are a lot of fun, particularly if you enjoy puzzles, and they are great for team-building exercises.

I’ve started reading ‘Career of Evil’ and I am over halfway through it already. It’s completely gripping and Galbraith has said it is the book “he” has most enjoyed writing so far. It has a very macabre opening with a severed leg being delivered to Cormoran Strike’s assistant, Robin Ellacott, at their office in London. It’s shaping up to be a very significant book in terms of character development and the reader will learn a lot more about both Cormoran and Robin’s past. With this context in mind, if you are new to the series, I would definitely recommend reading the first two books in the series before ‘Career of Evil’.

Many thanks to Little, Brown UK, The Crime Vault and Time Run for organising such a fun event. And, of course, to Robert Galbraith for the signed copy of ‘Career of Evil’ which I will hopefully be receiving very soon!

21 responses to “Career of Evil by Robert Galbraith – Launch Event”