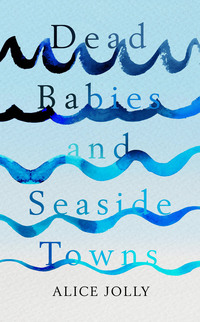 ‘Dead Babies and Seaside Towns’ is Alice Jolly’s memoir about her attempts to have a second child. When her first son Thomas is two years old, Jolly falls pregnant again but a scan reveals that the placenta has become partly detached. Her daughter, Laura, was stillborn in 2005, twenty-four weeks into the pregnancy. After several miscarriages, rounds of IVF treatment and failed attempts to adopt, Jolly had a daughter named Hope born in 2011 to a surrogate mother in Minnesota using a donor egg.

‘Dead Babies and Seaside Towns’ is a powerful book about grief, loss, fertility and parenthood which could – and should – be read by anyone, whether you have or don’t have children; can or can’t have children; want to or don’t want to have children. The medical and legal implications of IVF treatment, adoption and surrogacy are widely misunderstood and this book is helpful in dispelling a lot of myths, particularly the processes, emotions and decisions involved in surrogacy which is still very rare in the UK but more accepted in the United States. Some readers may find the title of the book off-putting or even offensive but it reflects the frankness with which Jolly is prepared to address a taboo subject, and it doesn’t feel she used it just for the sake of being provocative.

For such an emotionally charged topic, the book is neither mawkish nor grim, yet Jolly is also very honest and doesn’t attempt to disguise the painful facts about what happened to her. It is even more impressive that Jolly is able to give a truly balanced and measured account about such controversial issues and deeply personal experiences. She acknowledges the different views of family members and other acquaintances and is very open about how she was in a privileged position in being able to afford the financial costs of surrogacy and that she didn’t have complications during her first pregnancy whereas other women have never been able to conceive at all.

‘Dead Babies and Seaside Towns’ was published earlier this year by Unbound through crowdfunding with 50% of proceeds being donated to SANDS (Stillbirth and Neonatal Death Charity). Unbound is vital for empowering authors to write the books that need to be written. Rejected by major publishers because of the subject matter, ‘Dead Babies and Seaside Towns’ is certainly one of them, as is the successful campaign supported by J. K. Rowling this week to fund Nikesh Shukla’s book The Good Immigrant.

Many thanks to Alice Jolly for sending me a review copy of ‘Dead Babies and Seaside Towns’.

5 responses to “Dead Babies and Seaside Towns by Alice Jolly”