Akin by Emma Donoghue and The Confession by Jessie Burton

Autumn usually sees the publication of novels by popular authors in the run-up to Christmas and there are some excellent ones appearing on the shelves this year. ‘Akin’ by Emma Donoghue tells the story of Noah Selvaggio is a widower and retired chemistry professor born in France and based in New York. He is planning his first visit back to Nice since he was a child in time for his 80th birthday. However, he discovers he has an 11-year-old great-nephew called Michael whose father died from a drug overdose and whose mother is in prison. Noah is the only relative available to take care of Michael and he decides to take him along on his trip of a lifetime. END_OF_DOCUMENT_TOKEN_TO_BE_REPLACED

The Wonder by Emma Donoghue

‘The Wonder’ by Emma Donoghue tells the story of Lib Wright, a widowed English nurse who trained under Florence Nightingale during the Crimean war. She is sent to a rural village in Ireland to independently observe Anna O’Donnell, an eleven-year-old girl whose parents claim has not eaten any solid food for four months, subsisting purely on “manna from heaven” and a few teaspoons of water a day. While the community accepts this claim without questioning it and visitors travel from afar to witness the miracle, Lib is immediately sceptical and expects the medical surveillance to be over in a couple of days once the fraud has been exposed. She alternates her shifts with a local nun Sister Michael and considers every possible way food could have been secretly smuggled to Anna. However, as more time passes, Lib starts to doubt her own beliefs and realises that there is more to Anna’s case than meets the eye.
END_OF_DOCUMENT_TOKEN_TO_BE_REPLACED

One of my very early blog posts in May 2012 was a book review of Room by Emma Donoghue which was shortlisted for the Man Booker Prize in 2010. Last month, I attended a preview screening at The Hospital Club in central London of the new film adaptation directed by Lenny Abrahamson with a screenplay written by Donoghue herself. Starring Brie Larson as Ma and Jacob Tremblay as her son Jack, ‘Room’ has already received widespread critical acclaim including four Academy Award nominations earlier today and has dominated film festivals around the world. It had a limited release last October in the United States and will open in cinemas across the UK tomorrow on Friday 15th January 2016.

END_OF_DOCUMENT_TOKEN_TO_BE_REPLACED

Filed under Books, Other Stuff 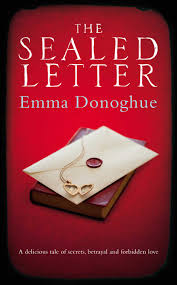 Having read some pretty strange books recently (The Unconsoled and The Unbearable Lightness of Being spring to mind), I really wanted to read something that was based upon some good old-fashioned story-telling and a linear plot.  On one hand, I wanted a book that wasn’t too taxing on the brain.  On the other hand, I wanted a book that I wouldn’t be embarrassed to read in public on a train. ‘The Sealed Letter’ by Emma Donoghue was just what I needed. END_OF_DOCUMENT_TOKEN_TO_BE_REPLACED For Ma, Room is a prison where she has been abused and raped.  But for Jack, Room is home and he knows nothing else. It is his struggle to deal with the alien concept of Outside that is the most affecting aspect of the book.  As well as writing very convincingly on this subject, Donoghue is also excellent at building suspense and evoking the claustrophobia of solitary confinement. END_OF_DOCUMENT_TOKEN_TO_BE_REPLACED