The Redbreast by Jo Nesbo 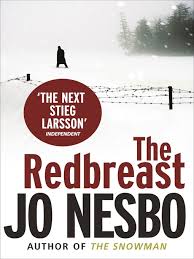 Earlier this year, I watched the first season of the TV series ‘Borgen’, a political drama set in Denmark, and got completely hooked to the point where I began to convince myself that I could speak Danish.  However, with the exception of reading the Millennium Trilogy a couple of years ago, I am definitely lagging behind the rest of the world when it comes to jumping on the Scandinavian crime fiction bandwagon and this week, I tried to rectify that by reading ‘The Redbreast’ by Jo Nesbo.

‘The Redbreast’ is the third book in the Harry Hole books but is the first one in the series that is available in English.  I can’t think of a good reason why the books have been published in completely the wrong order in the UK – the first instalment, ‘The Bat’ is due to be published soon – but at least ‘The Redbreast’ does work as a stand alone novel.  In this book, Harry Hole has been “promoted” to surveillance duties as an inspector after a security blunder.  However the discovery of an imported Marklin rifle triggers (excuse the pun) an investigation into a neo-Nazi organisation with roots tracing back to the Second World War.

‘The Redbreast’ contains exactly what you would expect in a crime fiction novel: it’s a fast paced and complex mystery which unravels very satisfyingly with an equally complex detective at the centre of it.  I would have preferred it if the scene hadn’t kept switching from the Second World War to the present day quite so frequently at the beginning as this made the story a bit confusing and difficult to get into.  If you read the book too slowly, it would be easy to lose track and give up.  However, perseverance through the first 150 pages or so does pay off and the second half of the book was more enjoyable with the ending leaving a few questions unanswered ready for the next book.

On the other hand, I was disappointed by some of the characters in the story which I thought were a bit clichéd.  The portrayal of Bernt Brandhaug particularly jarred with me and it was also hard to differentiate between the characters who fought in the war.  Whereas the real strength of the Millennium Trilogy lies in the brilliant character of Lisbeth Salander and her complex relationship with Mikhail Blomkvist, there is nothing as compelling as that in ‘The Redbreast’.  This is a shame as it prevents the book from being very good rather than just good.

‘The Redbreast’ isn’t the most original or the most unpredictable crime thriller but is still worth a read if you enjoy similar books.  I’m thinking of trying the Wallander series at some point and if I enjoy those books, then maybe I will be fully on the Scandinavian crime fiction bandwagon as opposed to just clinging on half-heartedly.

7 responses to “The Redbreast by Jo Nesbo”