The Chemistry of Tears by Peter Carey 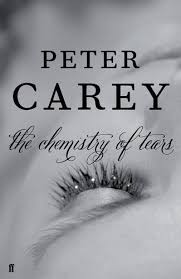 ‘The Chemistry of Tears’ by Peter Carey tells the story of Catherine Gehrig, an horologist living in London who had an affair with her boss, Matthew Tindall, for thirteen years until his recent sudden death.  In the midst of her grief, she is given the task of rebuilding a mechanical duck and discovers the journals of Henry Brandling, whose story set in the mid nineteenth century is also interwoven alongside Catherine’s journey through grief.

In many ways, the story is as complex as the clock-making involved in it and I’m still not entirely sure a) if I understood any of it and b) if I really got anything out of it at all.  I enjoyed reading Catherine’s narrative which was believably written but I found the parts of the story told from the point of view of Henry Brandling quite difficult to follow.  As a result, the story seemed a bit unbalanced as I always wanted to go back to the parts set in 2010 whenever a chapter about Henry appeared.  Carey’s characters are generally very well written though.  Although only a relatively minor character, I think Amanda, deserves a mention as her all too real depiction of an irritating Courtauld intern really did make me cringe (in a good way).

If you enjoy books containing weird headache-inducing literary metaphors then ‘The Chemistry of Tears’ is a good read.  There is no denying that Carey is an excellent writer.  I liked the way the language was quite poetic without being too flowery.  However, I never really got into it.  I don’t think I was in the mood for reading something quite so dense at the time especially after having read ‘The Unconsoled‘ recently. Overall, the chemistry was a bit too mixed for my taste.

3 responses to “The Chemistry of Tears by Peter Carey”