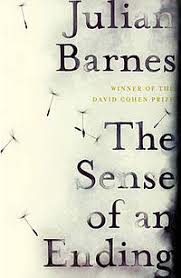 I have read quite a few of Julian Barnes’ other novels over the last few months and I am a real fan of his work.  I think I am now even more in awe of the power of his prose, having finally got hold of a copy of ‘The Sense of an Ending’ and devoured it in a little over two hours.

‘The Sense of an Ending’ is narrated by Tony Webster, who is now retired, divorced and looking back on the events of his youth in the early 1960s.  Tony is an interesting character being neither particularly reliable nor particularly likeable as we see in the first part of the book when he recalls his memories of his relationship with Veronica and his friendship with Adrian.  Inevitably, in the second part of the book, Tony’s past catches up with him, when he receives a letter from a solicitor and is forced to re-examine these crucial events as the consequences turn out to be more far-reaching than he had thought.  As the reader will see, it is disturbingly easy to lose perspective of what really happened as memories become further distorted by the passing of time.

As always, Barnes’ writing contains dry, ironic humour and brilliant observations of human nature.  The story is deftly plotted with the twists and tension coming at just the right moments.  In spite of its brevity, there is a lot of food for thought in ‘The Sense of an Ending’ in that there is something striking on nearly every page whether it is a turn of phrase or a painfully accurate observation about youth.  I think Barnes was probably right to keep ‘The Sense of an Ending’ at the modest length of just under 160 pages as I believe it would have lost some of its narrative power if the story had been dragged out further.

‘The Sense of an Ending’ is neither the first nor the last novel to deal with familiar literary themes such as ageing and memory but it must surely be one of the most unforgettable.  A worthy Booker Prize winner if ever there was one.

15 responses to “The Sense of an Ending by Julian Barnes”