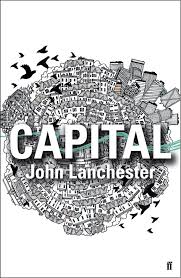 ‘Capital’ by John Lanchester is a state-of-the-nation novel which follows the lives of the residents of Pepys Road in London in 2007-2008 just as the financial crisis is beginning to wreak havoc on the world.  The characters come from all walks of life: they include a City banker, a Senegalese footballer, an elderly lady who has been diagnosed with a brain tumour, a Pakistani family who own the nearby corner shop and several other characters.  They all begin to receive anonymous postcards with the message ‘We Want What You Have’ written on them.  Why?

I had been looking forward to reading this book as I thought the premise was very interesting.  Even though I got through the book fairly quickly thanks to its short, punchy chapters, ‘Capital’ was not a capital read.  My main criticism of this book concerns the way in which Lanchester presents his characters.  Some, like Arabella Yount, had absolutely no redeeming features while the portrayal of immigrants in London was maybe a bit too politically correct.  Overall, I would have preferred a more nuanced portrait of Londoners. I had a look at the reviews on Amazon to see if it was just me who thought the characters were clichéd stereotypes.  It turns out there were quite  a few who agreed.  One reviewer said that Lanchester should have just written a 180-page satire on the City banker, Roger Yount and his insufferably vacuous wife, Arabella.  I agree that this could have been a lot more effective.

The only strand that really linked the characters – the mysterious postcards – was not a particularly convincing plot device and didn’t produce a satisfactory conclusion.  It also didn’t really draw the characters together and so their stories generally remained very separate apart from a few overlaps.  I suppose this is natural in that most people are not particularly close to their neighbours and the point is that they live very different lives but I still felt there needed to be something in the story which properly connected them all other than their address.

There are obvious parallels between ‘Capital’ and ‘A Week in December’ by Sebastian Faulks which is also a state-of-the-nation novel drawing on exactly the same themes, set in the same city with a similar collection of characters.  I read ‘A Week in a December’ about 18 months ago and I think Faulks’ book was generally a lot more convincing even though, like ‘Capital’, it also contains quite clichéd characters.  The financial crisis is a particularly pertinent and timely setting for a state-of-the-nation novel about London.  Unfortunately, I just don’t think either Lanchester or Faulks managed to write the definitive book on the subject.

3 responses to “Capital by John Lanchester”