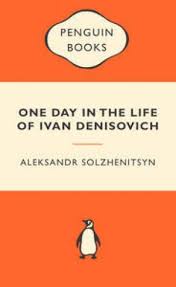 I was born somewhere between the Berlin Wall coming down and the Soviet Union completely disintegrating so I have no memory of the Cold War divide that dominated the world for nearly half of the twentieth century, but even I realise that the publication of ‘One Day in the Life of Ivan Denisovich’ by Aleksandr Solzhenitsyn in 1962 in both the Soviet Union itself and Western countries was pretty significant to say the least.  Based on Solzhenitsyn’s own experience of the gulag system, this short novella tells the story of a Soviet prisoner or zek, Ivan Denisovich Shukhov, who is in his eighth year of a ten year sentence for espionage for the Germans (a false accusation).  This shattering depiction of life in the Stalinist-era labour camps won the Nobel Prize for Literature in 1970 – and got Solzhenitsyn permanently expelled from the Soviet Union a few years later. END_OF_DOCUMENT_TOKEN_TO_BE_REPLACED