Catch Me If You Can by Frank W. Abagnale 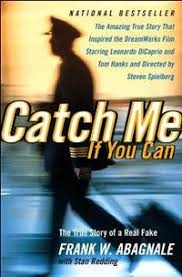 Frank W. Abagnale Jr was one of the most notorious con-men, forgers and imposters in American history.  Posing as a Pan Am airline pilot, a doctor, a lawyer and a teaching assistant at Columbia University in the 1960s, he managed to defraud millions of dollars from banks, mostly by cashing fake cheques.  This semi-autobiography outlines exactly how he did it and how he managed to evade capture for so long.

‘Catch Me If You Can’ is ghost-written (well, not entirely, Stan Redding does at least get his name printed on the cover) which I admit I was a bit apprehensive about at first as I tend to associate such books with D-List celebrities who rarely write anything longer than a shopping list.  As I expected, the writing itself is nothing special and the book is based solely on the facts about how Abagnale managed to commit fraud – it isn’t an account which makes any attempt to really explain why he did what he did.  Nevertheless, the reader will find the narrator maybe not likeable but at least entertaining.  Some elements of the book are very different from the film version starring Leonardo DiCaprio and Tom Hanks.  One section which I thought was better covered in the book was Abagnale’s contrasting experiences of French, Swedish and American prisons which for me was probably the most interesting part of his story.

The scale of Abagnale’s fraud and the length of time he was able to continue his fraud beggars belief at times.  I am particularly sceptical of how he managed to pose as a doctor for so long (but I imagine that pretending to be a sociology tutor probably wouldn’t be too difficult…).  But whether or not you read ‘Catch Me If You Can’ as fiction or autobiography, it’s still a very good story.  It is also easy to forget that Abagnale did all of his tricks in an age before CCTV, the internet, routine background checks, chip and pin machines, national databases, microchips in passports, GPS and so many other technological devices which help prevent this sort of crime.  In today’s less trusting and more security-conscious society, Abagnale’s methods and disguises just would not work.  It makes you realise how much the world has changed in a relatively short space of time.

‘Catch Me If You Can’ is an easy read which was ideal for me in a week when I am currently approaching meltdown before my first batch of Masters coursework totalling 12,000 words is due to be handed in next Tuesday.  If only Frank Abagnale could produce a fake degree certificate for me……

2 responses to “Catch Me If You Can by Frank W. Abagnale”