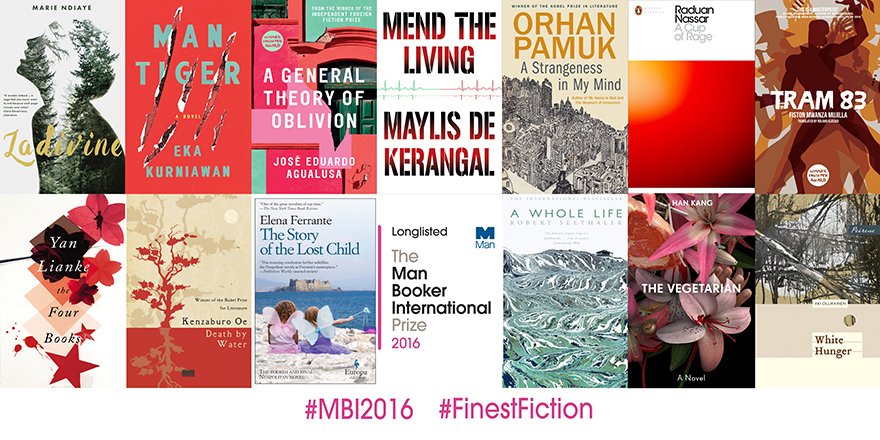 Last summer, it was announced that the Man Booker International Prize would merge with the Independent Foreign Fiction Prize to create a new literary award for translated fiction. In a blog post last year, I wrote that it effectively resulted in “the absorption of the Independent Foreign Fiction Prize under the Man Booker Prize umbrella, with a slightly shorter longlist and a much larger amount of prize money”. Having previously been awarded every two years to an author for their whole body of work available in English, the Man Booker International Prize now bears much closer resemblance to the IFFP rules in that the award is shared equally between an author and translator for a single work of fiction – either a novel or a collection of short stories.

Due to the reconfiguration of the MBIP, eligible books for this year’s prize must have been published in the UK between 1st January 2015 and 30th April 2016 so there is a larger window than there normally would be for an annual prize. Other books I would liked to have seen such as The Great Swindle by Pierre Lemaitre translated from the French by Frank Wynne didn’t make the cut. However, whereas last year’s IFFP list had a high proportion of German titles, the first Man Booker International Prize longlist since merging with the IFFP features authors from twelve countries writing in nine different languages. I’m really pleased to see two of my favourite books from the past few months on the list: The Story of the Lost Child by Elena Ferrante and Mend the Living by Maylis de Kerangal and I also have copies of ‘The Vegetarian’ by Han Kang and ‘A Whole Life’ by Robert Seethaler.

Last year, I participated in a shadow panel for the IFFP with other bloggers and I’ve signed up again for this year’s Man Booker International Prize. We will be reading the longlisted titles over the next few weeks so do look out for our reviews. In 2015, the IFFP shadow panel chose The End of Days by Jenny Erpenbeck translated from the German by Susan Bernofsky as our winner which also went on to win the actual prize. The question now is will the shadow panel’s winner match the judging panel’s choice for a second year running?

The shortlist will be announced on Thursday 14th April followed by the winner on Monday 16th May. What do you think of the longlist? Have you read any of the books?